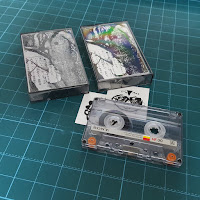 Before talking about the album, I want to talk this first.

I bought a The Gerogerigege's first self titled album, but I'm not sure is this a other unofficial copy release, or genuine one. The cassette cover (right one is which I got and left one is which I made a long times ago.) looks very unofficial, it's even looks faker than my self made version.

And it includes two inserts, but right side was little bit cut in one character with hair insert, and in the Discogs release page, it wasn't.

But about the cassette, cassette in Discogs picture is TDK AE30, so I thought mine was unofficial one, but photo in Yahoo Japan Auction site, used cassette was same. Not exactly, the Auction photo was Sony HF46 (and cover art was printed in red), and mine is Sony HF30.

I heard ZSF Produkt used C30 tapes and because of that, few second of the last track was being cut, and Sony HF30 tapes was on used in 80s. It's quite confusing, but whether it's unofficial or not (at least the cassette) I'm quite satisfied about just got the album at low price and quality if it's well made unofficial.

Anyway, as many Noise fans and Gero fans already knew, it was released by Masami Akita's (aka Merzbow) label ZSF Produkt. I don't know because released label was ZSF or it was Gerogerigegege's first album, but it's style is bit different than Gero's later albums. But that doesn't mean I don't like it.