Are You Guys Still Alive? I Am, Sorta.

So, how are you guys?

I had, and having a lots of things going on. Maybe need some time more or not.

I wanted to upload more on this blog but it's was quite hard to make a time of it.

So, I'm not dead, and even opened a vinyl shop in Daejeon, South Korea.

Because of that, many interesting albums went through and I got all the PNG/FLAC files.

I'll renew the links and reupload the albums soon.

If you guys are still alive...

Sorry for late update, I got lots of things going on- including changing my computer and stereo set etc...

Anyway, here's the infamous John Duncan's Pleasure Escape album. I was kinda hooked right after first I listened, because not the John's "performance art" recorded in this album, but how he make a theme/story in a track which just sounds like sleeping with a recording device. And the second track : "Move Forward, Film Soundtrack" was also great, reminding me of the track "Broken Promise" which included John's album Organic but more intense.

But, for someone trying to buy this album, I really recommend to buy the one with the insert book. like other albums released on B-Sellers, this one also have a small book with it, and it's quite interesting to watch. (Photos, interviews, writings...)

Again, this album doesn't contain explicit content but a theme is. For someone doesn't familiar with this album or John Duncan I recommend to searching about this album first.

Next, I'll be back with a Japanese private press albums! right after sort my new computer out... 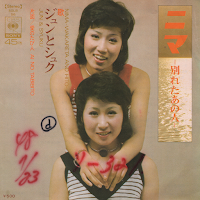 Kind of remembering the Korean War (6.25), this album will be one of peculiar albums I post here.

there are many Korean folk albums only released in Japan because of the censorship of the Park Jung Hee regime, and many heavily political themed albums like 그날이 온다 (The Day Is Coming; manufactured by Kojima Recordings Inc.) and apart from political reasons, there are many Korean songs in Japanese and vice versa in 70 ~ 80s because popularity of Korean 70s Psychedelic musics and 80s Japanese Electronic Disco musics. (Amusingly, A-Musik covered Nilririya and Come Back To Port Busan)

Anyway, this single by Jun & Syuku (준과 숙; Pearl Sisters in Korea) is including one of the Shin Joong Hyun's popular track Nima (님아; Oh Dear) sung in Japanese despite Jun & Syuku's most tracks in Japanese albums are popular Japanese songs. I don't know very much about the background of this album, but this version of Nima track is very different than Korean ones (Yeah, there are lots of different version), quite fast paced than original version and arrangement of guitar and wind instruments are shine brilliantly.

Me showing off some albums in Documentary "Retro : Dusting Off The Old Times".

Plus : I got a time off from work for 3 months, and for celebrating the "try to save money for changing my stereo", the big one is coming... some of you guys might hate spoilers, but it's original copy of John Duncan's Pleasure Escape, I'll try to post more frequently from now.
Posted by Sunaoira at 14:05 4 comments:

Here's the Sally May (or Mae)'s Kinpatsu Enka, first I saw and got interested by this album was from blog DRILLPOP. While getting inspiration from Japanese / Indian / Korean pinups, Vinyl jacket and I saw this album and like "Wait, I need to buy that album" and bought it last year I guess.

Soon hereafter she debuted as a singer for commercial ads. And Kinpatsu Enka was a quite a hit in Japan in that time. And really, I heard some other Enka albums but sure Sally May's voice made this album unique than other Enka albums. Bought for album jacket, found a unforgettable gem.

Posted by Sunaoira at 10:17 No comments:

Email ThisBlogThis!Share to TwitterShare to FacebookShare to Pinterest
Labels: enka, pop, Sally May 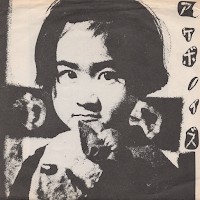 Before posting Sally May album today, I want to post Akevonoiz's (Discogs says Untitled but) self titled album, since I'm recovering from slump and in music, this album made me thought about when I started to collect Japanese independent band's albums (when the Japanese City Pop albums was cheaper) and made me think straight. 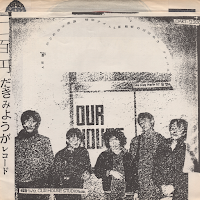 So, this album was recorded from Our House Studio, studio which some my favorite 80s band has pass through like P.T.A's, Gastunk and Sagittarian etc... and studio is still up to these days. I lost my chance to visit Modern Music (Rest in Peace, Hideo Ikeezumi) before, but if I have a got a another chance to visit Japan, I'll visit Our House Studio with some albums. If the budget is enough, I'll record some Drum / Shamisen in there lol.

But this album is not released by Cragale not HG Fact like bit-well-known label, and it's from Dakimyouga Records, Discogs says this is only released album by Dakimyouga, but catalog number (DAKI-2200) and style of album packaging and release on Flexi Disc, I think there's more albums from this label in Japan somewhere, or if I super lucky in Korea (Since I found Hiroshi Yoshimura's album, and private pressing albums, only promo released album from CBS/Sony and Vacant World by Jacks in Daejeon).

So, as you think, this album is one of 80s Post Punk album from Japanese Indie band. Guitar and Drums made think about Para-Phrase mixed with Idiot O'Clock, and Vocals are... bit reminding me of Jun Togawa with lower tone. 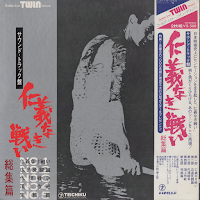 Before listening this album, there's something I need to say. The official Japanese title is Jinginakitatakai sōshūhen (Saundo Torakku-ban) which means it's soundtrack collection from famous Yakuza movie pentalogy : Battles Without Honor and Humanity. But the tracks and album is more like summary of the story, most part is dialogue from the movie scenes and original score or musical tracks are quite mostly repeated.

And of course, there's soundtrack of this album released by Vap in 1995, and I'm totally into this series' soundtracks but, since the album contains 43 tracks... I think posting that is bit overkill for theme of this blog.

So back to the topic, this album is "soundtrack" collection of Battles Without Honor and Humanity pentalogy, and I liked this movie quite a lot. Since watching glamorized Korean gangster movies (I live in Korea and because of mainstream hype, I can't escape from it) so, the movie starts from 1946 in Hiroshima and showing of the starting of Yakuza family and desperation of the characters was quite fresh to me to watch. 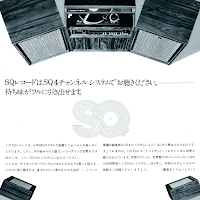 I'm really glad I bought this album after watching the pentalogy, this album was in my wantlist since I was just collecting Japanese albums.

So, I can't explain more about this album, but sure thing is: watching a movie before listening this album will help a lot. Unless you can speak Japanese.

Opening Track (not from this album) · D/L · Discogs

Random photo
One of insert in SQ Quadraphonic Album. 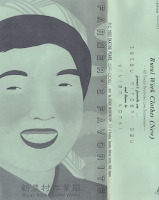 Sorry for late posting, but anyways here the album Rural Work Clothes (New) by Farmer's Favorite. It's from the underground label Skating Pears, but the album/band's style is quite unique than my expectation which Skating Pears label albums had in common. Because of that, I can't surely tell the style of the album (because of my lacking knowledge, and each tracks have different tones.) but, this album is like combination of Junk Jungle Genre's S/T album (Skating Pears; SP-008) and Perfect Product by Fetus Productions (B-Sellers; ISBN4-938198-06-1).

*While I'm editing the audio file, there is gap between the tracks, but since album jacket and tracklisting in Discogs are telling only one tracks for each side. And it's hard to hear, but there's some background live noise in those gaps, so I didn't separate the tracks.

And I want to give a shout-out to Costanzo who running such a wonderful blogs like Music x 5 and Various Recorded Detritus for suggesting to post this album. :)

Unrelated photo; Korean poster from 1964 of À bout de souffle (Breathless; 1960)
(Translation of Korean title is "Do Whatever You Want")
Posted by Sunaoira at 04:48 2 comments: